I recall being there on the first day that the American Sign Museum opened in Cincinnati.  It was in a difficult spot to find, just to the east of the downtown area.  I went around the block several times (in the days before ubiquitous GPS help!) before figuring it out.  But I finally made the requisite turns and found the place. What I discovered at that point was a museum that housed a wide variety of early American roadside signage which had been saved from certain destruction…

Fast forward.  Today was the tenth anniversary celebration of the museum in its new digs just west of downtown, hard off of I-75.  The larger space (and there is more available) is beautifully conceived and the interpretive information is just enough to help the average visitor get a handle on how signage has developed and changed over the past hundred years or so. 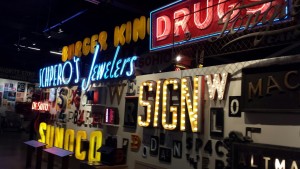 I share an odd connection with Tod Swormstedt, who is the driving force behind this unique museum. Some years ago, a lovely woman by the name of Jane Powell, contacted Tod about early poster and “show card” artists.  She and her daughter Lori were trying to dig up more information about the painters and artists who had painted one-off movie posters in the early part of the 20th century.  One of those artists happened to be my grandfather, the wonderful R. J Rogers. (Renfred, for those who care)  Tod’s family happened to own the industry trade magazine “Signs of the Times,” in which my grandfather had advertised aid for others who were painting movie posters at the time. 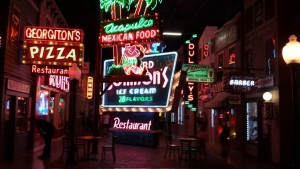 Personal feelings aside, The American Sign Museum is a gem…  My congratulations to Tod and everyone else involved. Now that so much of our roadside has been lost, there is, at least, this one place where you can walk back through a glittering American that existed — not too long ago.

« The Enchanted Forest: Remembrance & Revival » Old businesses in the 50 states…